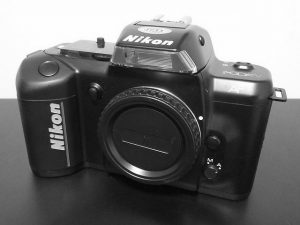 … and that’s what many people would say. The camera pictured about was released in 1987, the year I graduated. Yep, it’s old. It’s slow to auto-focus. It only has a one-point TTL phase-detection for that slow auto-focus. It DOES take a variety of Nikon F-Mount lenses, but doesn’t get anything out of the current features of the modern lenses because it’s computer (if you want to call it that), can’t understand them. The shutter range is only 1 sec to 1/2000 sec with bulb (in other word you have to time a long exposure yourself! … imagine the math involved). So why buy it?? Why waste your money??

Well, it still shoots film, and currently, although slightly expensive … the experimentation in film quality, film type, and art films are rampant. In other words it’s a great time to shoot in a world of film where creativity is blossoming like no other time. It is also a great time to step back to a limitation of 24 to 36 exposures (not 350+++), making you learn your craft more deeply and develop photography skill sets you normally wouldn’t … just to keep yourself from going broke.

The camera above still uses standard film (35mm), AA batteries (the next models up use CR123 or DL123 batteries) …. and all are standard. So the camera is usable, it’s not just a display piece. Even if it becomes a display piece it inspires the teaching of younger generations the history of photography … so an older camera even retains relevancy in this aspect.

What makes the old camera above still relevant (along with others) is that you can still buy a premium piece of glass (lens) that is hyper-sharp and produces shots on film that will blow peoples minds. Even though the camera above is limited in features (made for the entry level person to introduce themselves to Nikon in the 1980s), with a good lens and basic knowledge of settings and light – even an amateur photographer can use it to gain skills to produce amazing images that people will admire – of simple to capture a point in time with family that you don’t want to lose. So, it is still relevant, it still works, and with that you are saving landfill space and keeping dangerous chemicals from going back into the ground.

Skip a few Latte’s and keep a camera relevant!

Time Travel with Photography Part 2: Straight Into The Present